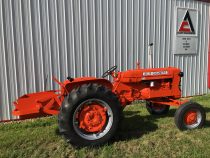 Thanks to Jim Pessek and the crew at J & L Videos for this great video showcasing the many events during the 2021 Orange Spectacular.

The Upper Midwest A-C Club hosted the 30th annual Orange Spectacular in Hutchinson Minnesota and was pleased to host this year’s location for the Gathering of the Orange – West. Hosting the national show brought many new visitors.  This year’s feature tractor was the D-19 to honor the first of this model which was first manufactured 60 years ago

Hiighlight from this video also include but are not limited to a look at some Allis-Chalmers toy and model railroad displays, the last Allis-Chalmers Tractor built in the early 1900s, an Allis-Chalmers G used at the LaPorte factory, an Interview with Jan Jocham – former employee of the West Allis Plant, and Much More!

Thanks for coming and see ya next year for the 2022 Orange Spectacular July 22-24.

Manage Cookie Consent
To provide the best experiences, we use technologies like cookies to store and/or access device information. Consenting to these technologies will allow us to process data such as browsing behavior or unique IDs on this site. Not consenting or withdrawing consent, may adversely affect certain features and functions.
Manage options Manage services Manage vendors Read more about these purposes
View preferences
{title} {title} {title}
Show Contacts