Gerald (Jerry) Lee Jacobson was born on 4-9-41 in Battle Creek, Iowa.  He was the first born child to Burton and Irene (Zech) Jacobson.  In 1959 he graduated from Wykoff High School in Wykoff, Minnesota.  August 14, 1966 he married Lois Finckh in Reading, Minnesota.  They made their home in Wykoff where they raised 2 children.  Lois passed away on March 25, 1998.  He was a mechanic at Opsall-Kavanagh Motors in Wykoff starting in 1960 and working until the business closed in 2010.

He had civic pride in Wykoff and was happy to have raised a family, worked and supported businesses in Wykoff.  He would regularly say, there is no place else I would rather live.   He was a 37 year member of the Wykoff Volunteer Fire Department.  He was very proud of his attendance and rarely missed a business or training meeting.  Many years he would schedule summer vacations around those meeting schedules.  He was most proud of when he was able to work fire calls on mutual aid helping neighboring communities when needed.

He was a charter member of the Wykoff Area Historical Society and was treasurer for many years.  He was a member of the Wykoff United Methodist Church and would usher when called upon.  He was a strong advocate for preserving history which lead him to being a supporter of the Fillmore County History Center and the Olmsted County History Center.  He was a member of the Mechanical History Round Table, a vintage tractor and equipment organization in Rochester.   It allowed him and others to work with the older four cylinder tractors and use some equipment that operated by belt pulley including grain threshers and saw mills.  He enjoyed participating in tractor pulls at these events and was proud of the trophies he won considering his tractors were basic stock tractors.

He enjoyed antique tractors and old cars.   He owned 4 antique Allis-Chalmers tractors.  He would also say that every tractor manufacturer made good models and some that were not so good.  He especially admired the Farmall F 20 tractor.  He was especially proud to have participated in a tractor caravan drive that allowed him and others to drive their tractors across the International border, driving from Oaks North Dakota to Porta-La-Prairie Manitoba Canada in 2004 to attend the Gathering of the Orange National tractor show.  He also attended national Allis-Chalmers tractor shows in Albert City Iowa and Kansas.  He enjoyed tent camping, road trips and drives around the county roads looking at the farms and houses in the country.  He also enjoyed county fairs, especially the “World’s Greatest County Fair” in Spencer Iowa to which he attended annually.

He was very proud of his 2 grandsons when they both became Eagle Scouts.  He enjoyed hearing about their Scouting activities and their school and work projects.  He was especially proud when both of his grandsons became Eagle Scouts.   He proudly wore a hat pin that read Proud Grandparent of an Eagle Scout.  He also enjoyed hearing about the latest build projects going on in his son in laws garage.

He enjoyed watching the History Channel on TV and especially admired President Franklin Delano Roosevelt for leading the county during the depression and WWII while confined to a wheelchair.

He took great pride in being able to identify current and former cars of Opsall-Kavanagh customers that he worked on.

The Wykoff High School Class of 1959 holds a dear place in Jerry’s life experience and memories.  He enjoyed staying connected to many of his classmates up until his passing.

Private family services will be held at this time with a celebration of life at a later date.

Leanne and Jerry Jr would like to thank the staff at the Chosen Valley Care Center and the Mayo Clinic Hospice for the wonderful assistance and care provided to Jerry over the past months.

For the 2021 Orange Spectacular, the show toy will be a model 2300 self-propelled sprayer. Download Flyer Now

Military Honors will be accorded by Star of the North Marine Corps League after the time of visitation. The Cease Family Funeral Home of Nevis, MN assisted the family with arrangements.

Elwyn was born on August 10, 1933 in North Hollywood, CA to Frank Elmer and Tynni Esther (Maki) Johanson. He graduated from Little Falls High School in 1951. Elwyn served in the United States Marine Corps from March 12, 1955 to March 11, 1963, making the rank of Lance Corporal before he was honorably discharged. He worked at Pillsbury and Zumbrota Creamery before he went on to work as a steam engineer at IBM until retiring in February of 1987.

He was a proud member of the Marine Corps League, the Zumbro Valley Arms Collectors, the Winchester Arms Collectors, Fur Traders Round Table, and the NRA. He was also a firearms safety instructor. Elwyn was quite the collector. A few of his favorite things were Allis-Chalmers tractors, Winchesters, Finnish knives, and all things military and historic. He was an avid reader and loved hunting.

He was preceded in death by his parents; his sister, Darlene Burns; his infant siblings, Delores and Michael; and his life partner, Audrey Wyman.

The Upper Midwest A-C Club Fall Banquet is cancelled for 2020.

Hopefully, we will see you at the Spring Membership meeting in April 2021.

Since we all miss seeing our favorite tractors in action at this year’s show, hopefully this year’s work day wheat harvest video will help fill the void.

Thanks to Jim Pessek and the folks at J&L Video for providing us with this great video. 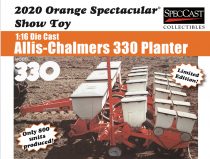 So if you would like a toy, get your order in today. Please download the form 2020-Toy-Flyer below

For those of you who have already ordered your toy planter, they will be delivered by the end of August. 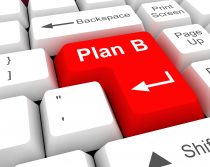 After much discussion, and with much sadness, the Board of Directors has decided to cancel the 2020 Orange Spectacular®. The health and safety of our members, volunteers, exhibitors and guests is our top priority during the COVID-19 pandemic. The Board of Directors also believes this is the best decision for the financial stability of the Club.

The Minnesota Gambling Control Board has approved postponement of the 2020 raffle drawing until July 25, 2021.

o The 2020 raffle tickets that have been sold will be placed in the raffle drawing that will be held on July 25th, 2021.
o The raffle drawing on July 25th, 2021 will be for the same 1960 Allis-Chalmers D14 Tractor.
o Any Club member with unsold tickets please hand write on the tickets the new drawing date of July 25th, 2021 before selling them. This will help clear up any confusion of the revised drawing date.
o If requested, your 2020 raffle ticket money will be refunded.
Swap meet vendors that pre-paid for 2020 space can have it applied towards the 2021 show or receive a refund, if requested.
Golf Cart rentals will be refunded to those who had prepaid.
Vendors who have pre-paid for vendor space will be refunded.
This year’s Orange Spectacular® Show Toys that were planned to be picked up at the show will be shipped to your address. Any toy orders received after June 14th will have a mandatory $15 shipping fee added to the cost of the toy.

Plans are being reviewed to reschedule and hold this meeting sometime during the show. We will update the website and our facebook page with updates when available.

This is a membership meeting, if you know someone that would like to become a member…bring them along!!!